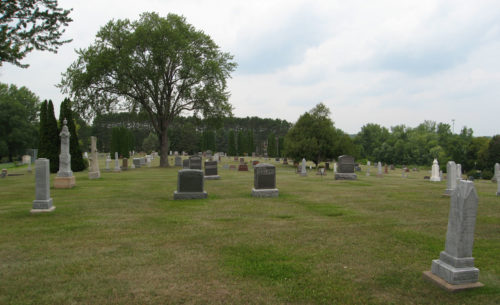 It was moments after my mom’s graveside service ended. I was falling apart. Both my hands on her casket, head lowered, sobbing because I felt like I hadn’t done enough to take care of her. And where was my husband/pastor? My rock? My man to help me through? He was walking away from the grave site looking for a tree. You see, my Alzheimer’s-ridden dad had walked up to Scott–not to thank him for the nice service he had just led, but to tell him, “I have to go the bathroom.” Overhearing the conversation, and the power of suggestion being strong for my schizophrenic brother–he decided he had to go too. Then DJ, who was stuck by his dad’s side–and that whole power of suggestion thing for an 8 year old boy–pretty soon he was dancing around too.

So Scott had to find a place for 3 generations to pee.

In the middle of a cemetery.

He herded them to a tree and they got their business done. You know the saying “The family that pees together, stays together” or something like that…

This is one of my favorite family stories. How funny the situation Scott found himself in, moments after leading an emotional goodbye to my mom. It’s one of the most holy times in a Christian’s life, when someone you love is now face to face with Jesus, and you’re left behind to wonder about all of the wonders they are seeing. Scott had just finished talking about Heaven and what my mom might be experiencing and the reality of her seeing Jesus and then…

he was navigating 3 not-so-sure-of-their-aim generations peeing at a tree.

The holy and the bizarre.

I’m pretty sure my mom was giggling.

I’m pretty sure Jesus was telling her what was going on with a smile on His face as she giggled at the thought of her husband, son and grandson peeing at a tree in the middle of the cemetery as her body was about to be buried.

I think Jesus loves stories like that. One minute we’re on holy ground; the next minute–not so holy, but earthly. He sees the struggle.  He sees us struggling in our sin-sick bodies here on earth.

He lived in an earthly body that needed to be fed and rested and relieved.

But He knows what’s coming.

He took the poison out of the sting of death.

He changed the victory that evil thinks death has,

to the Victory those who believe in His name have.

When the perishable has been clothed with the imperishable, and the mortal with immortality, then the saying that is written will come true:

“Death has been swallowed up in victory.

Where, O death, is your victory?

Where, O death, is your sting?”

The sting of death is sin, and the power of sin is the law. But thanks be to God! He gives us the victory through our Lord Jesus Christ.  I Corinthians 15:54-57

After ten years of being trapped in a body destroyed by ALS, my mom was now freely moving in her imperishable, glorious and powerful heavenly body.

What a story of restoration and hope!

We can’t get that body until we die.

But we can get ourselves closer to Jesus.

We can get ourselves closer to His Light.

We can put ourselves under His authority and escape the traps of this world:

the striving, the worrying, the pushing and shoving to get to the top of… something.

If we just die to the allure of this world, we get closer to that glory.