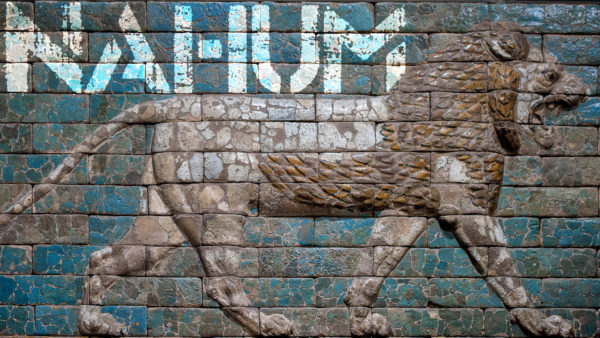 The book of Nahum reads like a scene out of the Avengers movies,
mountains collapsing, rivers drying up, rocks shattering into pieces.
Mortals trembling in fear, their hearts melting as they fall to their knees.
Lots of anger and wrath, destruction and plundering.

I will, at times, in movies like this, fall asleep. Yep, if there is a lot of action, lots of explosions and crashing, lots of car chases and buildings collapsing… my mind shuts it out and I grab a few minutes of rest. I wake up confused to where I am and what is going on. I ask Scott “What’s going on? I fell asleep” He looks at me like “What is wrong with you…?”

All the fighting and crashing and destruction is ultimately for good. The Avengers are seeking justice and trying to save Earth from total destruction against evil.

Sounds familiar right? Except it’s a bit more personal.
Because God is a jealous God – it says so right there in verse 2, chapter 1.
It says: “The Lord is a jealous and avenging God; the Lord takes vengeance and is filled with wrath.”
It’s a white-hot passionate anger. Fighting for a cause, fighting for justice.
Fighting for His people.
See He will crash mountains, collapse palaces, bring His wrath on anyone and anything that hurts His people.

When we think of fighting for someone, fighting for “love”, we think of jealously and the pettiness of getting back at someone, like maybe… “Diary of a Mad Black Woman”. Or the crazy scariness of “Fatal Attraction” (not that I have ever seen that one).

But God’s jealously and wrath is different.
God is good. He is slow to anger and He is good.

But once His anger is stirred – watch out. There is no one mightier, no one more powerful, no one more complete with His wrath than God.  “Whatever they plot against the Lord He will bring to an end; trouble will not come a second time.” (verse 9). Like I said watch out.

This can be unnerving for those of us who know the Father by His love and grace. But His wrath comes out of His intense love for His people. A love so strong that He will crush to rescue us. He will even crush us, to rescue us, from ourselves. He loves justice and hates sin and He loves people. So nothing is wasted in His anger. No energy or time. No futile effort. None of that which consumes us, consumes Him. His jealousy, anger, wrath have a purpose, a plan.

And He is the One that loves.

From the beginning of time, He has crafted a love story to bring us to Him. He calls us, He woos us, He fights for us.

But He will not force us. The choice is ours.