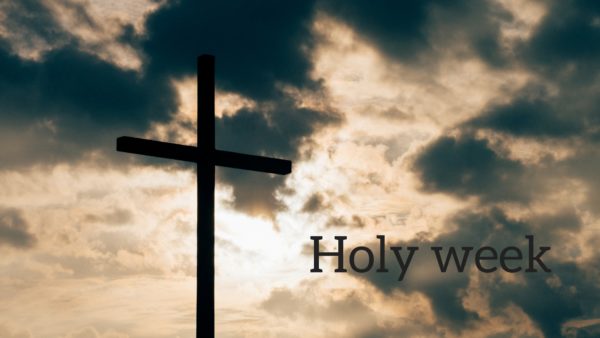 On the Sunday before His resurrection, Jesus travels to the city of Jerusalem. Luke tells us that upon seeing the city, Jesus weeps over Jerusalem for its rejection of Him – “…because you did not know the time of your visitation.”

He then makes His “Triumphal Entry” into the city. This event is recorded in all four Gospels. John reminds us that Jesus has just recently raised Lazarus from the dead and word has gotten around, so people were amazed by Him and eager to see Him. Twitter and Facebook probably exploded, and I’d bet all the cell networks were overloaded! Matthew says ”the whole city was stirred up.”

We refer to it as Palm Sunday because crowds of onlookers spread cloaks and palm branches on the road ahead of Him. This was done not only to honor Jesus – their triumphal hero – but likely a mockery of their Roman occupiers who greeted returning military conquerors in the same way.

“Blessed is he who comes in the name of the Lord! Hosanna in the highest!”

The “Triumphal Entry” is significant because it fulfills the prophecy of Zechariah 9:9. When we resume our study of the “minor” prophets and get to Zechariah, we will see this in more context. The people of both Zechariah’s day and Jesus’ day must have thought it very strange that their Messiah would ride a donkey – instead of a large powerful war horse or chariot like a great leader would do. With the benefit of hindsight and careful Bible study we know that God’s plan all along was not for the Messiah to be a great military or political leader, but to humble Himself on our behalf and justify us before a holy, just, and righteous God.

Lacking a view like ours, both Jesus’ disciples and enemies saw His great popularity as a precursor to rising political power. His enemies began to feel threatened and His disciples were about to become shell-shocked.